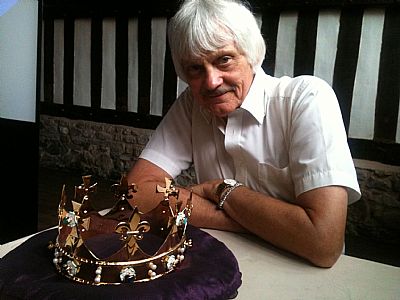 Dr John Ashdown-Hill was a very good friend to the North Mercia Branch and it was always a privilege to have him come and talk to us.

He was quite a shy, retiring man, but he had a wicked sense of humour and enjoyed entertaining members of the Richard III Society when he attended meetings.

In the early years of the 21st century he was Branch and Groups Liaison Officer for the Society and worked really hard to fulfil this role in contacting leaders of Branches and Groups to ensure they felt they really belonged.

However, the most important thing to remember is that without his research Richard III would never have been found.

His book "The Last Days of Richard III" describes his quest to trace the mitrochondrial line of DNA from Richard III's eldest sister, Anne, Duchess of Exeter to a living descendant. It was when, having read this book, that Philippa Langley decided to go in search of Richard's lost grave.

Leicester Council were asked for the third time for permission to dig up the social services car park on the Greyfdriars site and it was only on being told that the DNA had been successfully linked that they finally gave their consent.

The rest, as we say, is history.

After John died, the North Mercia Branch organised a Latin mass for him in the church of Our Lady of the Assumpton in Swynnerton. (See Local Ricardian Sites)

We must never forget the contribution John made to the Looking For Richard Project.

John visited the Branch three times. On his first visit "Embroidery Bob" presented him with a t-shirt with "Mythbuster" embroidered on it - now shown on the inside cover of John's book, The Mythology of Richard III. John was very proud of this and so we are linked with him. 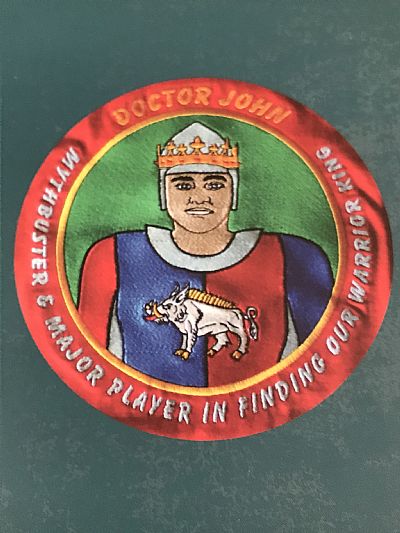 When he stayed with me, he made himself at home. I can honestly say that there are not many women who can come downstairs first thing in the morning and find the man who discovered Richard III's DNA curled up in the hearth, drinking black coffee and eating a tea cake!

The last time he came to Nantwich I took him home for him to rest before his talk. A member arrived early, so she and John got chatting about yoga. Next thing John was crouched on the floor showing her how he could still get both legs over his head!

John requested an Eccles cake for his breakfast, so I went out to Chatwin's (our famous tea shop) and brought four Eccles cakes because they weren't very big. When I came downstairs next morning, two had already gone!

On the day of the re-internment I met John around three o'clock. He had already had four interviews after the famous eyeraising incident!

Our gratitude to John knows no equal. Wonderful books, meticulous research and the discovery and identity of the mortal remains of King Richard III.

The obituary in the Daily Telegraph described him thus: "John Ashdown-Hill, who has died aged 69, was an independent, some would say maverick historian, whose research led to the discovery of the remains of Richard III in a Leicester car park. 'Independent"? "Maverick"? Thank goodness he was. We will not see his like again.

Tribute to Dr John Ashdown-Hill by the BBC:

The historian who played an "absolute pivotal role" in tracing the remains of Richard III has died.

Dr John Ashdown-Hill's research into the fate of the king's body after he died in battle in 1485, led to its discovery in a Leicester car park in 2012. He was also instrumental in tracing descendants of Richards III's family, which provided mitochondrial DNA confirmation that the bones were the king's.

The "leading scholar of the House of York" died on 18th May.

The Secret Queen: Eleanor Talbot, The Woman Who Put Richard III on the Throne      https://www.amazon.co.uk/Secret-Queen-Eleanor-Talbot-Richard-ebook/dp/B0078XHAVE/ref=sr_1_1?dchild=1&keywords=Eleanor+the+secret+queen&qid=1598266149&sr=8-1