A note from author Annette Carson

As an honorary North Mercian (and founder member of Richard’s Army!) I am sure most fellow-members will be familiar with what I mean by ‘a new Mancini’. However, our movement to vindicate Richard III is gaining new foot-soldiers all the time, so here’s a reminder.

One of the most important reports of Richard’s accession was actually penned at the time it happened, in 1483, by Domenico Mancini – the only contemporary eye-witness report we have. The bad news is that it was written by a hostile reporter, an Italian attached to a leading French courtier. And at this precise moment in history relations with France were on the verge of war: France had just broken a treaty with England and insulted the English princess Elizabeth by ditching her betrothal to the French Dauphin.

Mancini wrote with a jaundiced French attitude, was ignorant of many aspects of England’s governance, and depended on information from those around him. This doesn’t add up to a very credible reporter. Even more unfortunately, his manuscript was discovered and translated in 1936 by a historian with decidedly anti-Richard views. He even mis-translated the title as ‘The Usurpation of Richard III’. That was the only edition that existed for 85 years.

I tried to propose a new version some years ago but the idea was rejected. So when lockdown happened, I thought it was time to buckle down and do it myself. This is the new book which will arrive hot off the presses on Monday 22 February, looking at Mancini with a more modern viewpoint.

It offers (1) an analytical introduction with some fairly revolutionary ideas; (2) a new and more accurate translation of Mancini’s actual words; and (3) 40 pages of historical notes to the text, informed by 21st-century scholarship. The notes aren’t compulsory – there won’t be an exam (unless you really want one LOL) – but when you read Mancini’s words it may help to have an explanation of why he wrote some extraordinary things. As I write this, the book is available to pre-order on https://www.troubador.co.uk/bookshop. 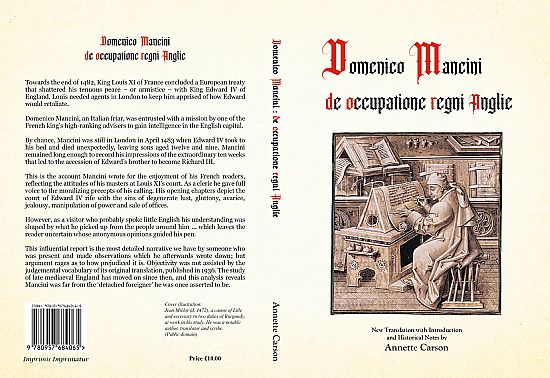