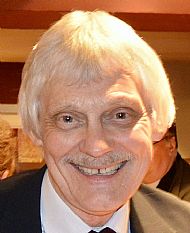 Over a number of years members of the North Mercia Branch have suggested that we hold a social afternoon where we could just meet and chat and discuss Richard III without the time restriction of a meeting in order to get to know members better.

Some members meet others by attending the regular lunch dates we have at the Crown Hotel prior to the meetings of the Branch. The Branch has grown considerably since its foundation in March 2010, so it has not always been possible to speak to everyone who attends, hence the suggestion of a social afternoon.

The month of April would appear to be most suitable as his birthday fell on 5th April - far more than on 18th May, the day he died. So, in 2021 we hope to celebrate his life and his unique contribution to the discovery of the mortal remains of King Richard III.

Without John, Richard would never have been found. It was his book "The Last Days of Richard III" that inspired Philippa Langley to begin the search for the mortal remains of Richard III and to set up the Looking for Richard Project with John, Annette Carson and Dr David Johnson and his wife Wendy.

Every Ricardian owes them a huge debt and to know that in their lifetime Richard was found will be something they will not forget.

Our Dr John Ashdown-Hill Day will be informal. We hope to sit and talk about Richard and John and his team and to serve refreshments consisting of tea and coffee with toasted tea cakes, Eccles cakes and cheese scones which were all John's favourite snacks. He expressed a liking for tea cakes and Eccles cakes for breakfast and he used to visit a garden centre near to where he lived in the Colchester area and would always order cheese scones.

We would like to invite every Ricardian, no matter where they live, to share this occasion with us on, or as near as possible to, April 5th.

We also extend this invitation to all admirers of John's achievement and his work.

We would like to think how thrilled John would be to know that all his Ricardian friends, and anyone who has enjoyed reading his books, are creating this event for him in his memory.