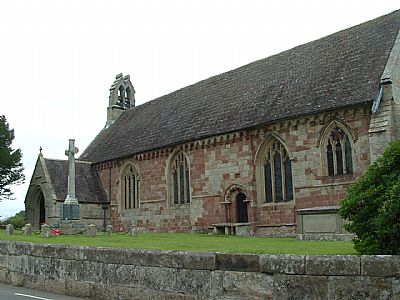 In the Calendar of the Close Rolls for 22nd October 1484 Westminster, there is an entry that states

"To the bailiffs and and burgesses of Shrewsbury for the time being - Order to pay eight marks and the arrears out of the fee farm of that town yo the perpetual chaplain of the chapel of Hedistaston in the parish of Wemme co. Salop in the diocese of Coventry and Lichfield as on 7 September last, by letters patent, to show his devotion to the glorious Virgin Mary, mother of God, the king founded the above chapel to be served by a perpetual chaplain, bound to say divine service each day for the safety of the King and Anne, his Queen, during their lives, and of other benefactors and to pray for their souls, when they shall have passed away and of Richard, duke of York, the King's father and others, for which purpose the King has assigned eight marks a year to be received by the chaplain at the hands of the bailiffs of Shrewsbury and has given him special licence to carry out his duties without interference or molestation of him and his heirs, justices, escheators, sheriffs etc as is shown in letters patent".

There is a similar entry in the Calendar of Patent Rolls dated 7th September Nottingham.

There is a mark on the south wall of the church indicating where the King's altar stood. The church has beautiful wall paintings, three superb Norman doorways, carved heads, and the stained glass in the east window depicts a figure with its hand raised in blessing and a white rose on the table denoting allegiance to the House of York. There is more stained glass in all the windows, but of a later date, but there are numerous depictions of the white rose that appears in the remaining medieval stained glass on the south side. 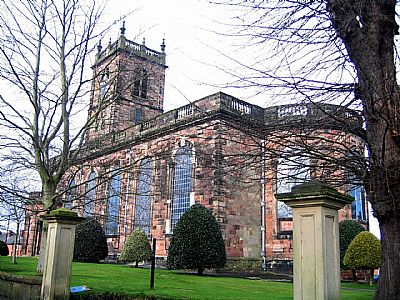 The medieval church was partially destroyed when the Tower collapsed in the 18th Century, but there is a slab in the porch marking the heart burial of Sir John Talbot, Earl of Shrewsbury, hero of the Hundred Years War and father of Lady Eleanor Talbot  - "The Secret Queen". 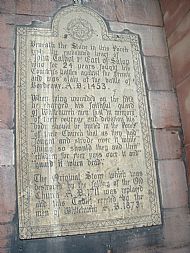 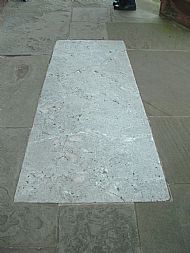 The earthworks of the manor house where she was brought up can be seen across the lake at Blakemere. Sir John Talbot's tomb is in the chapel in the south aisle. 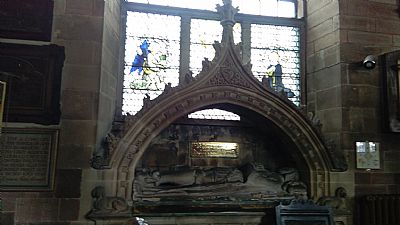 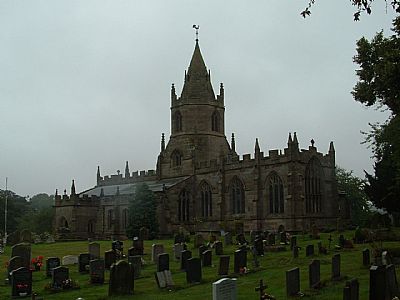 There are various entries in the guide relating to the Medieval period, but two are of special interest.

Our Lady of the Assumption, Swynnerton 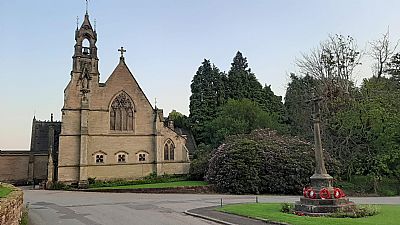 When the North Mercia Branch was formed in 2010 we decided to commemorate Richard in a way that he would have understood, so we have masses said at Our Lady of the Assumption, Swynnerton. Luckily the priest, Father Paul, also says Latin masses, so when appropriate, we can have a Latin mass, which Richard would have recognized. Mass is said to mark Bosworth, Richard’s re-interment, and sometimes for his coronation or birthday. During November, Easter and Christmas, masses are said for Richard, Queen Anne, and Edward of Middleham.

When John Ashdown-Hill, a good friend of the Branch, died, we had a Latin mass to celebrate his life.

Our Lady of the Assumption is the private chapel of Lord Stafford (Basil Francis Fitzherbert, 15th Baron Stafford), and acts as a mass centre for local parishioners. It was built adjacent to Swynnerton Hall in 1868, following the Catholic Emancipation Act of 1829. The architect was Gilbert Blount, a pupil of Pugin. The hall itself was built in 1729, after the original Manor House was destroyed by Parliamentary forces during the Civil War. Its grounds were landscaped by Capability Brown.

The original barony was created in 1299 for Edmund de Stafford. The 2nd baron was made Earl of Stafford in 1351, and the 6th baron was made Duke of Buckingham in 1441. It was his grandson Henry Stafford, the 2nd Duke who aided Richard III to the throne, but was later executed for treason.

The Stafford Dukes of Buckingham held the title until the 3rd Duke, Edward Stafford , was executed for treason in 1521 by Henry VIII, and all his titles were attained. The title of Baron Stafford was eventually restored in 1547, and granted to his son Henry Stafford, when he married Ursula Pole, youngest daughter of Margaret Plantagenet, daughter of George Duke of Clarence, and Richard’s great niece.

The Barony is one that can be passed through the female line, so when the male Stafford line died out, marriage to the Stafford heiresses brought the title to the Howards, Jerninghams and eventually to the Fitzherberts. 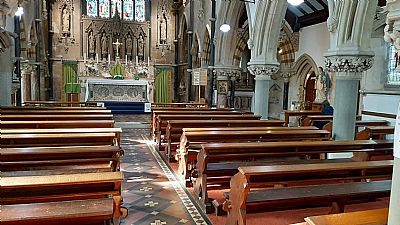 It is interesting to note that all these families were not necessarily on the same side during the Wars  of the Roses. The Fitzherberts of Norbury were Yorkist even in death. At the family tombs in Norbury, Nicholas Fitzherbert (died 1473), who was Remembrance of the King in the Exchequer, wears a Yorkist livery collar of suns and roses, with a pendant of a lion, representative of the House of March, and descent from Edward Mortimer. His son Ralph (died 1483) is also wearing a Yorkist livery collar of suns and roses, but with a White Boar livery badge of Richard III as a pendant.

Meanwhile one branch of the Swynnerton family, which styled itself Pershall, following the marriage of John de Swynnerton to Eleanor de Pershall, was at the battle of Bosworth, but on the Lancastrian side. Hugh Pershall was one of four men who were knighted by Henry VII on Bosworth Field.

Following a commemorative mass at Swynnerton, Lord Stafford was reported to have said “My family was at Bosworth, but on the wrong side.”